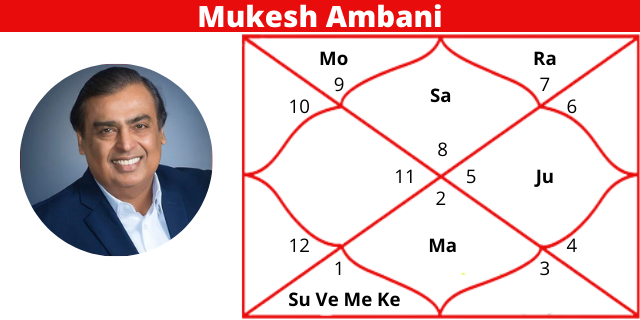 It is very important to know Transit and Dasha for the analysis of any birth chart. In Vedic astrology, Vimshottari Dasha is given much importance. Here we have given the information about the phase of which planet starts in Mukesh Ambani’s birth chart.

Mukesh Ambani’s horoscope is Scorpio’s Ascendant, Where Saturn is located in the first price. Moon is located in the second house, which is known as “Dhan Bhav”. Here the moon is the lord of destiny creates a beautiful Dhanyoga. The position of Sun, Venus, Mercury, and Ketu in the sixth house produced many Viparita Raja Yoga. On the contrary, due to Viparita Raja Yoga, there was a struggle in the beginning, but later he succeeded in defeating his business rival. The lord of Ascendant Mars is sitting in a business house, Mars is looking at the first house by seven aspects and second house by the eighth aspects. The position of Jupiter in the tenth house makes Amla Yoga, which gave a beautiful Fame.