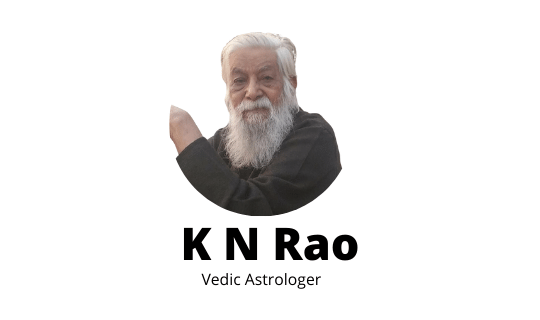 K N Rao: Talking about the best astrologer in Indian astrology at present, then K N Rao comes first in it. Because the contribution to the subject of astrology is incomparable.

Here we have shared with you important information regarding K N Rao. If you want to know about great astrologers like K N Rao, then read this article completely.

K N RAO is an Indian Vedic astrologer. His full name is Kotamraju Narayana Rao, he belongs to the Brahmin family of Andhra Pradesh. He was the second child out of four children of K R Rao, who was an eminent journalist during the independence period. K N Rao’s elder brother Pratap Rao was posted in the Foreign Service and his younger brother Vikram Rao was the President of the All India Working Journalists Association. His youngest brother retired as a bank manager and later joined the prestigious quarterly “Journal of Astrology”.

K N Rao was personally very educated. He did his Masters in English Literature, and later he joined the Indian Audit and Accounts Service. K N Rao was an English language lecturer before joining it. He retired as Director-General in 1990.

How did K N Rao’s journey of astrology begin?

K N Rao started learning astrology at a very young age. When he was 12 years old, he was taught important subjects of astrology such as marriage, children, and Prashna horoscope by his mother. His Mother K. Saraswani Devi was also a good astrologer and K N Rao mentioned their technics in some books.

He fell in love with astrology from an early age and started learning astrology through his mother. When he went to work, he used to analyze the birth charts of his co-workers. In this journey of astrology for a long time, he has personally collected more than 50000 birth charts, whose 10 major events of life have also been analyzed on the basis of astrology.

Later on, becoming his astrologer Guru, Guru is very important in life. K. N. Rao had three gurus from whom he got the knowledge of astrology. His first mentor was his mother, from whom he started learning astrology at the age of 12. He got the primary and important information about the subjects like marriage, children, and questions from there.

Later, Pandit Bhaskaranand of Gujarat became his astrologer guru. If K N Rao has taken his most knowledge of astrology from any guru, then it is Bhaskaranand Ji. Bhaskaranandji is mentioned in many books written by him. KN Rao had already been told by Bhaskaranand that he would have to make many foreign tours to expand astrology and reach the right information to the people, and he said all this when K N Rao never thought about it. Was | The words said by his guru were later also correct and K N Rao has given his statement in the council of astrology in many countries.

The mantra guru of K N Rao was Swami Parmanandji, who had given him the initiation of the mantra.

What are the Famous Predictions of K N Rao?

Apart from these, there are many other predictions, but it is very difficult to show them all here, so some predictions have been given which can be easily searched on the internet.

By the way, Vedic astrology is from the Vedic period and many thousands of people and sages have famous their thoughts and research on it, but the work that K N Rao has done in modern times is incomparable.

In his context, the prediction that his guru Bhaskaranandji had predicted that he would go abroad and increase the interest of people in Vedic astrology proved to be absolutely correct. He gave his lectures on Vedic astrology in many countries, which influenced people to connect with him and Vedic astrology. Today, many people are associated with K N Rao as disciples and as crazy about astrology. He was the chief guest at the second conference of the American Council of Vedic Astrology.

K N Rao played a very important role in starting the Vedic Astrology course at Bharatiya Vidya Bhavan, New Delhi. Even today he is the advisor and senior teacher of the courses of this institution. Bharatiya Vidya Bhavan is available as one of the best places to learn Vedic astrology, from where about 4000 people learn Vedic astrology every year. Many foreigners are also included in those learners.

K N Rao has personally disseminated many types of research through various mediums as well as he has also written 40 more important books which are mostly based on astrology.

Many books have been written about astrology by K N Rao. Here we have given information about some of their important books.

What is K.N. Rao’s view on Jaimini astrology?

K.N. Rao is an enlightened and knowledgeable astrologer who is an expert in every branch of astrology. He has put his thoughts on almost all the topics of astrology through his various books. But still, if more priority has been given to the Jaimini astrology system by them.

He has written many books on Jaimini Astrology as well as he has also written a book on how to predict results from Char Dasha.

All those who believe in astrology must have thought at some point in time that if we have such Good Yoga and Bad Yoga in our birth chart, then what will be the horoscope of God. The birthdates and planetary positions of Lord Sri Ram and Krishna are available in our scriptures, but many astrologers have different views on this.

K.N. Rao has personally stopped predicting any person. For the last few years, he has worked on research and on how astrology can be strengthened. Right now, his age is very high, and his body does not support him well, so he meets fewer people personally. Still, if anyone has a great desire to meet him then he can contact Bhartiya Vidya Bhavan Delhi.